Water Street was transformed in Lancaster, PA, on Sunday, May 21, 2017.  It was Open Streets Lancaster!  There was food, music, and plenty of local businesses sharing activities and information about their services.  Most of the organizations and businesses there featured activities that got people active and moving.

First, The Circus School of Lancaster was there.  They had hoops, acro-yoga, and Krystal Younglove the stilt walker.   She’s the one above there in the top photo.

I hung out with the the circus school members for a little while and hooped.  People seemed very receptive to their concept, which is awesome! 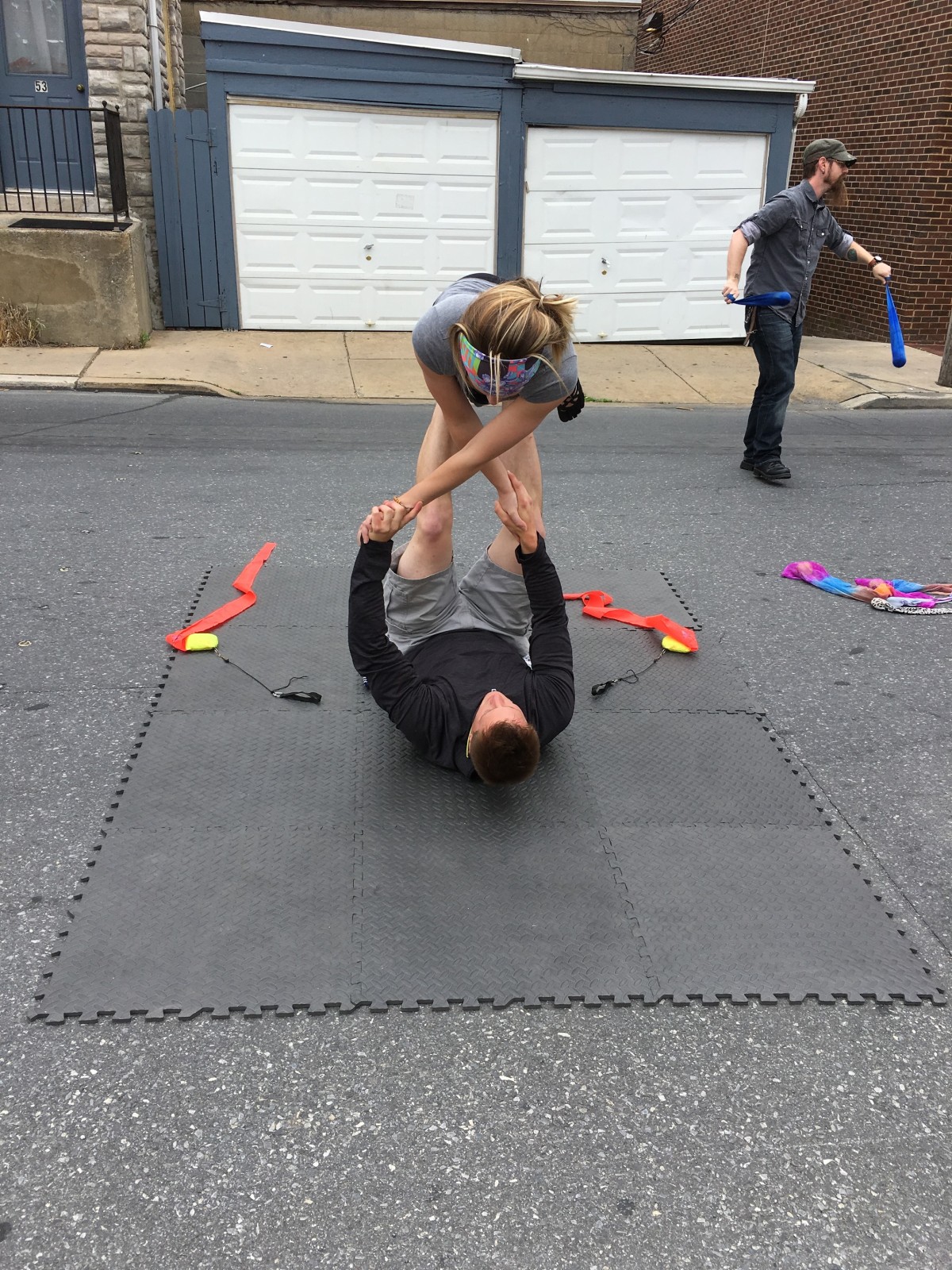 As for music, Nick DiSanto was nearby, playing his one man band apparatus and providing a lot of joy.  He was also fun to hoop to as he played.

I moved along Water Street looking for something to drink, and hear DJ Freez playing some great tune for some break dancers, BUT…. I found Rachel from Studio Spin and her station.  I hooped with them for a bit, too.  She had poles set up and another studio member was there introducing people to pole and POUND.

Overall, Open Streets Lancaster is a fun way for people to get out, get to know their neighbors, and learn about activities and businesses available in the area.  Go next year! 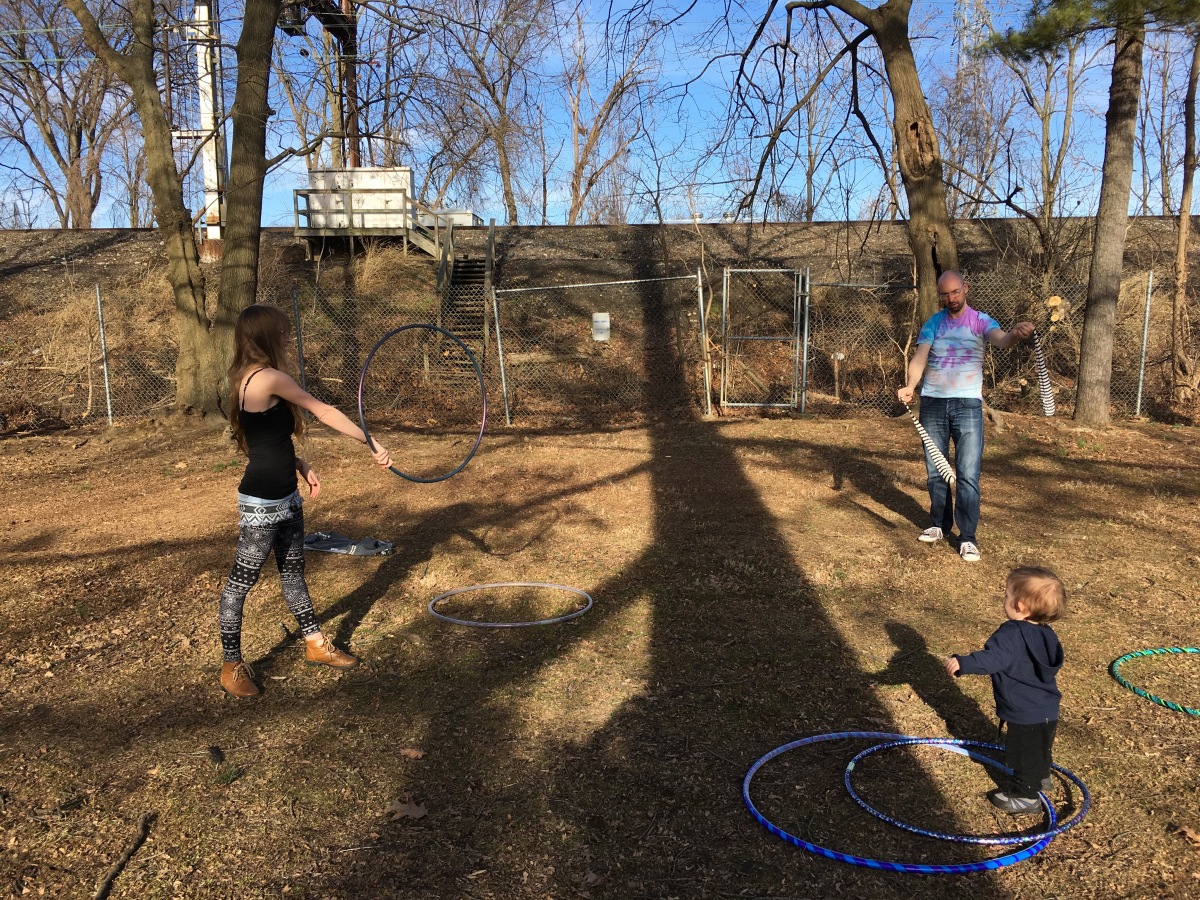 We are having a stretch of unseasonably warm weather here in February, so a few of us got together at Long’s Park in Lancaster, PA, USA for a hoop jam.  A hoop jam.  In February.  It was almost 70 degrees Fahrenheit when we were out on Saturday the 18th!

We had a nice time!  Marcus and Bethani, who are fairly new to poi and hooping, respectively, got the jam together.  I was there, along with Hilary and her cutie baby daughter, Nora, pictured below, as well as Amanda, along with her mother and cutie toddler son Thorin.  They are in the photo above.

Being that it was such a nice day, I believe a large portion of Lancaster was in the park that day, as I’m sure most people are suffering from cabin fever.  I know I was. 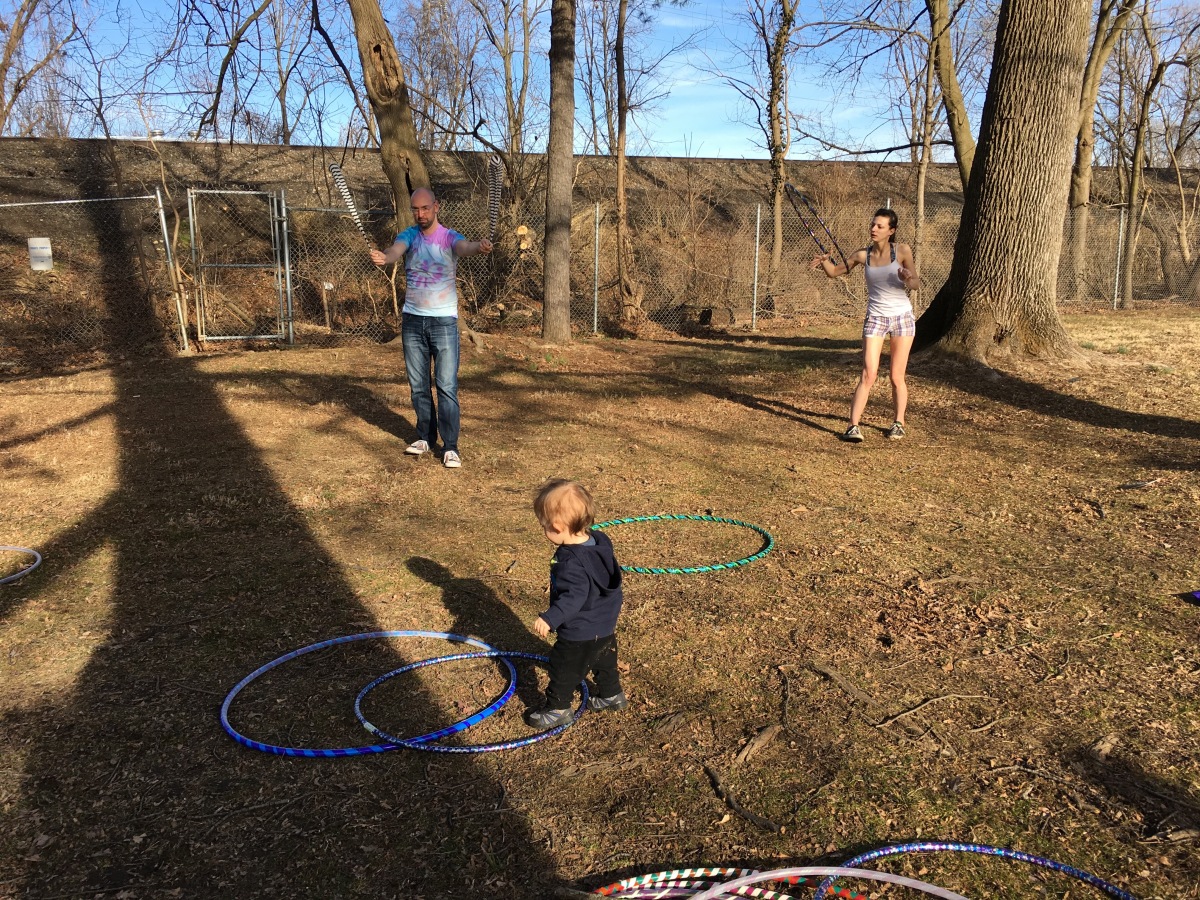 As always, I’m glad I went.  I make new friends and get to know the ones I knew better.  (Marcus and I knew each other from before because we’ve attend the same photography meetup.)

I hope if you are in the Northeast of the USA, you are enjoying the weather.  I find it slightly disturbing to be honest, with global warming and all.  This is not normal weather, but I’ll take the warm sunshine over snow! 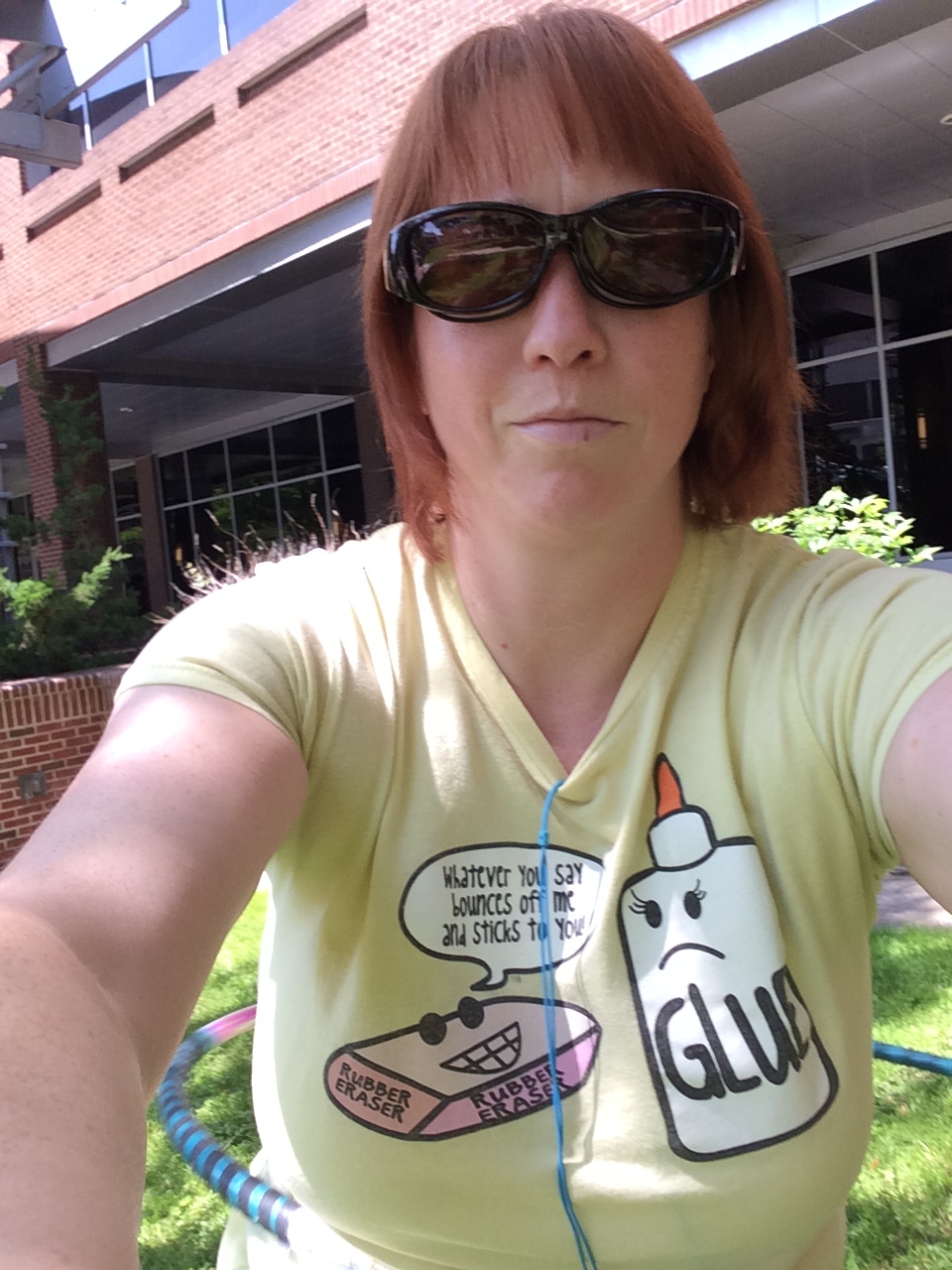 May has decided to be May, and it is gorgeous outside.  I decided to hoop outside in Binn’s Park in Lancaster, PA over my lunchtime break.  It was a glorious day to do so.  I brought of change of clothes along to work just for the occasion.

I even ventured to take a silly selfie, and I am hooping during this, to document the day.  Then, I put in my earbuds, cranked up one of Spotify playlists and had fun.

As usual, I got a few looks and some smiles.  I mostly kept to myself and kept on doing what I doing.

I even practiced some of the dancing footwork that I’ve been working on.  It felt good to break loose.

I was outside hooping in Binn’s Park for about 20 minutes.  I then packed up and went back inside to cool down and change.  Then, it was back to work.

I think tomorrow is supposed to be nice as well!  And the next day!  I think there’s a little more lunchtime hooping outside at Binn’s Park in my future.

The day started out rainy, but cleared up beautifully just in time for Lancaster Social Circus Day held at Buchanan Park, Lancaster, PA.  It was a rousing success!

My job was to help man the table to sign people in with waivers, but in between attendees, I was able to get some hooping in, being beside the music and all.  I had a great time. I think everyone, performers and attendees alike, did, too.

People came in off the streets, people came in from the dog park, and people came because they saw it on Facebook.  I believe when performance time rolled around, there were probably about forty people their in attendance.

Ringmaster and organizer Chris Tamburro was ecstatic over the success of this event, which was the first of its type that helped organize.  He’s the one in the foreground of the top photo in the red wig and jacket.  Well done, Chris!

I think people had a fantastic time playing with hoops, learning to juggle, discovering poi and contact staff, as well as giving acro yoga a try.

I hope this happens again next year.

Here are some more photos of the day that I got on my GoPro.  I didn’t get too many, as I was quite busy!

Oh, and here’s some video of parachute play that Jenny Hill of Acts of Jennius brought.

Thank you to everyone who had a part in this, and thank you for letting me help out.  The day flew by, and it was evident that a great time was had by all.

I didn’t get a chance to take many photos from Friday’s Pop Up Circus, but I did get some.  Here we are are in action!  I didn’t get any photos of one man band Nick DiSanto, but he was really good.  Everyone was!  I had my hands full with hula hooping kids and parents.  I was tired, but I had a great time and was glad to be a part of this event.

I have a wonderful event to tell you about.  If you in Lancaster on April 17, 2015, come out to Penn Square to see the Pop Up Circus!  I will be there helping man the information table and showing people how to hoop if they want to try.  Check out the event on Facebook, and we hope to see you there!