We are having a stretch of unseasonably warm weather here in February, so a few of us got together at Long’s Park in Lancaster, PA, USA for a hoop jam.  A hoop jam.  In February.  It was almost 70 degrees Fahrenheit when we were out on Saturday the 18th!

We had a nice time!  Marcus and Bethani, who are fairly new to poi and hooping, respectively, got the jam together.  I was there, along with Hilary and her cutie baby daughter, Nora, pictured below, as well as Amanda, along with her mother and cutie toddler son Thorin.  They are in the photo above.

Being that it was such a nice day, I believe a large portion of Lancaster was in the park that day, as I’m sure most people are suffering from cabin fever.  I know I was.

As always, I’m glad I went.  I make new friends and get to know the ones I knew better.  (Marcus and I knew each other from before because we’ve attend the same photography meetup.)

I hope if you are in the Northeast of the USA, you are enjoying the weather.  I find it slightly disturbing to be honest, with global warming and all.  This is not normal weather, but I’ll take the warm sunshine over snow!

On Saturday evening, my husband Sam and I attended a bonfire that some friends of ours were having that included some flow, fire, music, and sky gazing.  I did take some hoops and did some hooping myself before it got too dark.

Two of the guys, Sterling and Chris, along with Amy, did a little fire prop flow.  I love the look of fire prop flow and the whooshing sound it makes, but I’m actually scared to try it myself.  I was more than happy to take some photos, though!  Here are a few of them. 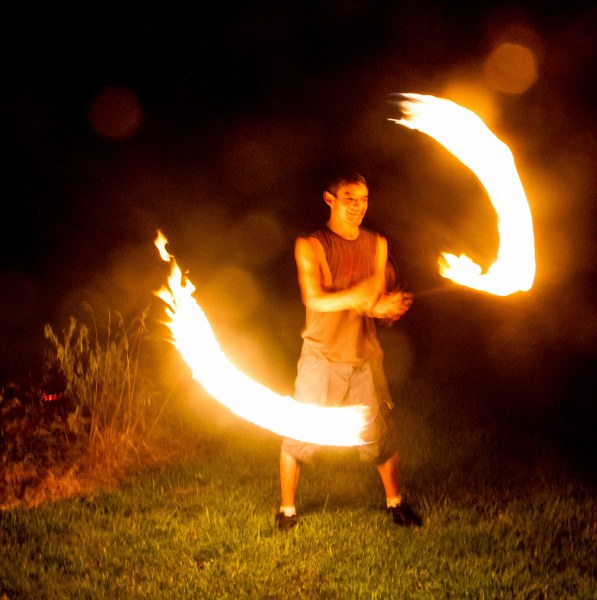 Very cool stuff!  If you want to see more, head on over to my Flickr album of photos of the evening’s festivities.

Sam and I were there WAY after our bedtime, and it was well worth it.  We had a great time!

The day started out rainy, but cleared up beautifully just in time for Lancaster Social Circus Day held at Buchanan Park, Lancaster, PA.  It was a rousing success!

My job was to help man the table to sign people in with waivers, but in between attendees, I was able to get some hooping in, being beside the music and all.  I had a great time. I think everyone, performers and attendees alike, did, too.

People came in off the streets, people came in from the dog park, and people came because they saw it on Facebook.  I believe when performance time rolled around, there were probably about forty people their in attendance.

Ringmaster and organizer Chris Tamburro was ecstatic over the success of this event, which was the first of its type that helped organize.  He’s the one in the foreground of the top photo in the red wig and jacket.  Well done, Chris!

I think people had a fantastic time playing with hoops, learning to juggle, discovering poi and contact staff, as well as giving acro yoga a try.

I hope this happens again next year.

Here are some more photos of the day that I got on my GoPro.  I didn’t get too many, as I was quite busy!

Oh, and here’s some video of parachute play that Jenny Hill of Acts of Jennius brought.

Thank you to everyone who had a part in this, and thank you for letting me help out.  The day flew by, and it was evident that a great time was had by all.

See the flyer up above for more information and what you can learn at the event.  Print it out and share it with your friends!  Heck, share this post with your friends, too!  It would be great to see you there.

Again, here’s the Facebook page, where, again, you can get more information.

Also, you can read more about the event on another one of my posts, too.

You can learn more about Social Circus Day on the worldwide Facebook page, as well.

The World Hoop Day Variety Show and Playshop combo was awesome!  We had a modest audience for the show, which I understand from the theater’s manager, Terry, was pretty good for the first year an event like this happens.  The show itself went beautifully.

For my act, I hooped to “Shut Up and Dance (With Me)” by Walk the Moon.  At one point I went down into the audience to have someone come up on stage and, well, dance with me.  No takers from the adults or the kids, BUT….one woman got up on stage with me after I was back on it.  She danced with me.  Whoever you are, ma’am, thank you.

The playshop rocked, too.  We not only had kids make hoops, but we didn’t realized that the parents did, too!  How cool is that?!  We had plenty of hoops and supplies for hoop making.  You can see me way in the back in the photo helping with extra shiny tape and such.  Afterwards, we had two epic games:  thread the needle and hoopscotch.  Then, the four of us who performed went around and showed people tricks and techniques you can do with hoops.

It was a great morning.  I was ready for lunch when I go home.  Next year, you do need to come out.  Put it on your calendar.  The first Saturday in October.  I’m pretty sure we’ll be doing this again.

Come on out to the Ephrata Main Theatre in Ephrata, PA for the World Hoop Day Variety Show and Playshop!

Who:  YOU!  The show is open to the public!  The playshop is for children 6+.  Register here: http://cafeworldhulahoop.bpt.me/

I will be performing, as well as Jenny Hill of Acts of Jennius, Autumn Cornell, and Chris Tamburro.  You will not want to miss this show!