Remember the Hooping Game frenzy from three years ago?  It was a Facebook group that you could join where you mentioned you wanted a song to hoop to, and someone gave you one.  You had 48 hours to post your video, and then you gave your giver a song and they had to post a video.  Ring a bell?  I think it’s still going on, too, as a closed group on Facebook.

It was in that group and on YouTube is where I posted my very first hooping video.  I had only started hooping in October 2013, so I was a little shy about participating, but I threw my proverbial hat in the proverbial ring.

Picture above is from that video.  It was in our old apartment kitchen, and I couldn’t hoop outside because there was a ton of snow on the ground.  I remember coming home from work after brainstorming my possible set up and after listening to the song I was given, which was “Crystalize” by Lindsey Stirling.

So, my point of this post, mainly, is that I’m toying with revisiting this song again and see what I can come up with NOW with a few more years and skills under my belt.  I’ll post a video, too, of course, in the spirit of the the first one.

Keep an eye out! 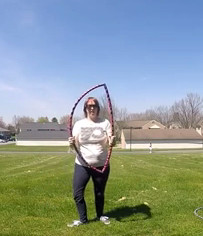 The Flow Bow came about because I HATE to waste materials.

Here’s the story.  I wanted to make a heart hoop, and I thought I could wing it without a tutorial and build it from reverse engineering.  I had PE tubing, check!  all I needed was two elbow 3/4″ connectors.  Easy purchase, which I did.

So, yeah.  After trimming the ends and trying to redo things a few times, The Flow Bow is what I came up with.  To make myself feel better, I decided to tape it up and play with it.

It sort of looks like an eye, or a semi-circle.  Here I am demonstrating some of what can be done with The Flow Bow.  I apologize for the cruddy audio.

So, that’s my newest toy/creation/abomination of a flow toy.  I do like my Flow Bow.  Next, I will try to make a heart hoop by looking at the directions, first.

Did you see the new Star Wars movie yet?  If so, get thee to a movie theater.

I saw it Sunday.  As you probably can tell, I loved it.  J.J. Abrams did a great job directing, as did the cast did with acting.  Woo hoo!

So, in honor of the Star Wars franchise, I did a quick hoop dance after the movie celebrating my favorite piece of music from all the movies.  I present to you “Cantina Hooping.”